HEK293: An Essential Human Cell Line with a Unexpected Origin 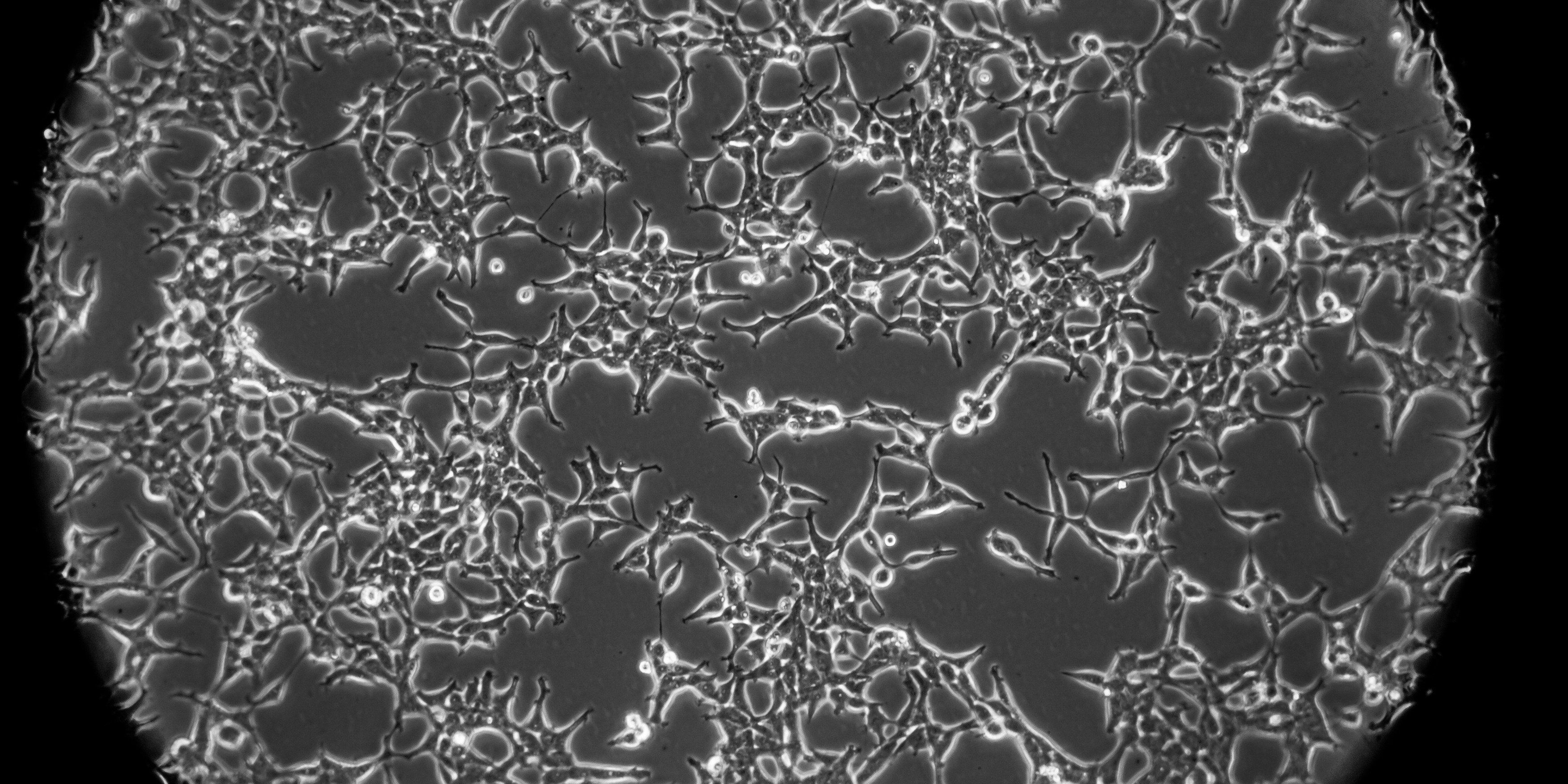 HEK 293 cells and their derived cell lines are widely used in research and biotechnology. Understanding their origin, capabilities, and limitations is essential for optimal results, which we discuss here.

Cell lines such as HEK293 cells are crucial for areas such as biotechnology, fundamental research into cell biology, and biomedical therapies of the future. Typically, the description of a ‘cell line’ is reserved for immortalized mammalian cells that can be continually cultured for a time of weeks to months without deterioration, with some well-characterized cell lines even having been propagated for many decades.

This continuity and reproducibility has made cell lines integral to many endeavors and is in sharp contrast to the usual behavior of mammalian cells, namely a growth arrest after a set number of divisions imposed by the Hayflick limit. Methods to generate immortalized cell lines differ and include starting from already immortalized cancer cells (such as HeLa cells) as well as introducing viral or mammalian genes such as telomerase to effect an indefinite proliferation. As the method of immortalization influences the resulting cell line, the origin of a widely used cell line such as HEK293 can be illuminating for working with it.

In 1973, Frank Graham (a postdoc in Alex van der Eb’s group in the Netherlands) cultured cells from human embryonic kidneys (HEK) to generate an immortalized cell line by transfecting DNA from adenovirus type 5. By integrating into the genome of the cells, the adenovirus DNA should prevent the arrest of the cell cycle and therefore allow for a continuous propagation of the resulting cell line. From all the experiments Graham and van der Eb conducted, only a single clone survived this daunting endeavor. Unfortunately, this process was not very efficient and the name of the cell line – HEK293 – stems from a numbering system, making this the 293rd experiment. Originating from a female fetus, HEK293 cells are today among the most used mammalian cell lines for a wide range of applications because of their ease of transfection as well as culture.

Despite stemming from kidney tissue, HEK293 cells – time and time again – exhibited properties of immature neurons. This curious behavior led to a thorough characterization of this important cell line, revealing that the genomics and transcriptomics of HEK293 cells most closely resemble adrenal cells, endocrine cells producing steroid hormones. As adrenal cells are similar to neuronal cells, HEK293 cells indeed preferentially enter neuronal lineages upon spontaneous differentiation. The original adenovirus seems to have exhibited a preference for this cell type, explaining the low efficiency of generating a HEK cell line from kidney cells. These analyses also revealed that the adenovirus DNA integrated into chromosome 19 and that HEK293 cells routinely carry 64 chromosomes, making their behavior different from primary human cells in many aspects.

From one to many – HEK293 and its derived cell lines

While HEK cells are cultured in many laboratories around the world, these cells are not necessarily HEK293. Radiating outward from the original cell line, a number of derived cell lines have been established to best suit a range of applications. Introducing the viral SV40 large T antigen has created HEK293T cells, enabling the replication of transfected plasmids with an SV40 origin of replication. This change has made HEK293T cells attractive for producing large amounts of recombinant proteins or viral particles, as high plasmid levels can be reached by transient transfections.

Both HEK293 and HEK293T represent adherent cell lines that form a stable connection with coated cell culture dishes. This limits their volume to a two-dimensional space. Therefore, HEK293F cells were selected to be cultured in suspension by adaptation, elevating them to the three-dimensional space and allowing for more efficient growth of high-density cell cultures for recombinant protein production in bioreactors. The cell line HEK293FT further merges benefits from HEK293T and HEK293F by introducing the SV40 large T antigen into HEK293F cells as well. Next to many additional derived cell lines, HEK293SG deserves to be mentioned. Stemming from the suspension-cultured HEK293S cell line, HEK293SG are designed to produce homogeneously glycosylated biopharmaceuticals by the deletion of MGAT, a key chokepoint of the glycosylation machinery.

Working with the wrong cell line is shockingly common. An estimated 20% of all experiments are not performed on the intended cell line, potentially skewing results and wasting time as well as resources. The most frequent cross-contamination is exhibited by HeLa cells that can be particularly aggressive and fast-growing. Both cross-contamination and plain misidentification/mislabeling lead to this situation and many journals and cell line repositories have begun to remedy this by mandating cell line identification, as less than half of all researchers regularly authenticate their cell lines.

While many cell line misidentifications can already be corrected by visual inspection, short tandem repeat (STR) analysis represents a gold standard of cell line authentication. In this genetics technique that is also used forensically, characteristic repeat regions of 2-5 base pairs are subjected to DNA fingerprinting for a rapid and inexpensive authentication. Importantly, cell lines such as HEK293 – with acquired mutations in mismatch repair genes – can alter their characteristic repeats upon prolonged culture, leading to negative authentication results via SPR.

One major application for HEK293 and its derived cell lines lies in fundamental research, as it allows for the detailed investigation of human proteins in a cellular background. For this, cells usually need to be transfected with a gene of interest. HEK293 cells are particularly easy to transfect and culture, which has led to their prominence in the research community. Many methods for transfection exist, separated into transient transfection for protein expression for days (usually with an adjuvant molecule binding to plasmid DNA and enabling its cellular uptake) and stable transfection for protein expression for months (by genomic integration via viruses or transposons). Then, protein interaction, localization, or behavior can be readily investigated.

Another widespread use for HEK293-derived cell lines is the production of recombinant proteins that require either folding or post-translational modifications exclusive to mammalian cells. Biopharmaceuticals would be a prime example of these recombinant proteins, with an ever-increasing proportion of the highest-grossing drugs and swiftly growing biotechnological opportunities. This application is mostly performed with suspension cell lines, such as HEK293F, grown in bioreactors. To optimize protein production, transgenes are usually stably transfected with a subsequent selection of clonal cell lines with the best production characteristics.

Lastly, HEK293-derived cells are routinely used to produce viral particles such as lentiviral particles that, in turn, can for instance be used to transduce non-dividing cells. Here, adherent cell lines modified with the SV40 large T antigen are predominantly used.

When searching for related cell lines, one’s goal is key. Different cell lines are specialized for different aspects and, for optimal results, there is no ideal cell line. For those interested in fundamental research or drug testing, other human cell lines, such as the colorectal Caco-2 cell line or the breast cancer cell line MCF-7 could be valid options. For an alternative for recombinant protein production – especially for producing antibodies – Chinese hamster ovary (CHO) cells are among the most important cell lines. Finally, the propagation or production of viruses has to be performed in permissible cell lines for the respective virus, such as Madin-Darby Canine Kidney (MDCK) cells for influenza viruses.

Laboratories rely on thousands of specialty supplies to operate. Laboratory inventory tracking methods are essential to control cost and...

This protocol describes the entire life cycle of a mammalian cell culture. It starts with seeding the flask and finishes with harvesting,...

8 steps to increase the productivity of your lab

We all wish to increase our lab productivity. We have deadlines to meet, publications to write, and patent applications to submit. Since resources...